Monday Musings: an Eye for an Eye…

By ladieswholunchreviews on October 28, 2019 | 3 Comments 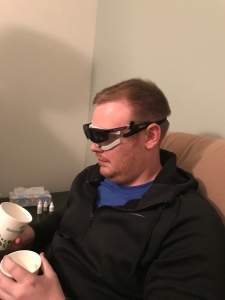 Do you remember me telling you I had cataract surgery several weeks ago? Well, I was able to repay oldest for all his chauffeur duties with my doctor visits by driving him Friday for a LASIK consultation. And, surprisingly, surgery the same day as they had an opening and offered him a discount if he could take the appointment within a week.

We went to lunch then back for his surgery — surgery that took 18 seconds per eye. Yes, that’s right, 36 seconds to perfect vision! He left wearing the goggles and sunglasses but was able to drive the very next day. His recheck on Saturday was perfect and he’s one happy camper already!

I’m apparently falling apart physically, bit by bit. To go one year without some sort of medical procedure is still a pipe dream for me!

Within the last five years I went from hearing my eye doctor say you have the start of cataracts, let’s keep an eye on them, to I have good news and bad news — Your vision has gotten so much worse, but it’s only because you have cataracts! Yes, he’s a very funny, cheerful guy.

I suggested they might be genetic because my sister, mom and dad all had cataract surgery and he said, sure, let’s go with that😂. The other possibility is that I’m simply getting closer to that magic age, so, yay!

But the final straw came a few weeks ago when I slipped on dark wood stairs at my friends’ house and realized when I looked down I just didn’t see the stair. I’m still getting over the aches and pains from that mishap…

So, as a public service before I hurt myself again or injure someone else, I’m having the surgery this Friday on my right eye and in two weeks on my left. If I’m absent for a bit again, that’s all it is and I’ll be back soon, new and improved once again!

This morning I’m off to have some test for astigmatism to see if they can use Toric implants to correct it. Wish me luck!

Photo by Pixabay on Pexels.com

Uhm, yeah, that beach is where I wish I was right now instead of my overly air conditioned house.  Sorry I haven’t been posting much.  I’ve been sidetracked by the ordinary summer things that keep us all busy.

It’s been super hot in the Midwest, like mid-90s hot and humid with heat indices in the low 100s.  Not great for spending time outdoors but we did over the weekend, watching JP practice tee ball.  Those poor kiddos running in the heat for an hour!  At least grown ups got to stay in the shade…

Hubby’s younger sister is having surgery today to repair a brain aneurysm that has been pressing on her optic nerve and causing double vision and balance problems.  We are still anxiously waiting any word as she’s in TN and we’re in IL.  But it is truly miraculous what procedures can be done nowadays.  And had she not had symptoms, they probably would not have found the problem until it was too late.

I got adjusted by the chiropractor again this morning and he has a newer, stronger massage table.  It’s like being on an amusement park ride!  All three of us are going to the gym this week and we each have eye appointments.  And the pest control guy is coming tomorrow to make sure our carpenter ant problem is under control.

Then on Wednesday it’s Independence Day here but I swear people have been setting off fireworks for at least a week now.  The poor dog hates going outside when it gets dark and the noise starts.

Speaking of noise, last year we were at older son and DDIL’s house on July 4th and people nearby started shooting off fireworks during the late afternoon.  JP, who was four and a half, was playing ball in the yard when a really loud explosion went off.  He ran for all he was worth to the picnic table where we were all sitting, yelling, “That scared the hell out of me!”

All four grandparents looked disapprovingly at his daddy, biting our lips and trying very hard not to laugh.  “What?” he frowned.  “Why is it always my fault?”  Why, indeed?

Hope you all are having a lovely July, wherever you are!

If you’re one of my kids, you can skip this if you want.  Or if there are just some things you don’t need to know about me, you can skip, too!  It really is a TMI post!

I’m still on the fence about my white hair — right now I think it’s kind of striking, but we’ll see as it gets longer.  JP pats it and says, “Nana, it’s like you have a little lamb on your head!” 🙂

I have surgical bras which I must continue to wear 24/7 because the drainage tube is still in.  The bra zips up the front and has Velcro straps to hold tube(s) so they don’t drag.  More activity means more drainage, so I’m taking it easy.   No gym yet, but soon, maybe next week!

My stomach is a multi-hued wonder of purples and yellows from the Lovenox injections (I’ve done 28 now before and after this surgery) which I have to continue along with the Coumadin till my INR level is at least 2.  Hopefully it will be in the range when they test again tomorrow.  Fingers crossed.  I’m running out of unbruised places to use!

But the really fun part is that in about 3 months the plastic surgeon will do another minor surgery on my right boob to create a nipple.  It somehow seems way more intimate than just talking about removing a boob.  The mastectomy was performed with a horizontal incision across the breast in an elliptical shape so the nipple was part of what was discarded.   I’m not sure even I want to know the details of how they recreate one, but they tell me it’s just a local anesthetic so it can’t be too bad.  Then they will tatoo an areola about two weeks later and then I’ll finally be done!

On Friday I had my last big (haha, no, just regular size!) breast reconstruction surgery and it went well.  I was more nervous than about the previous surgeries, mostly because of the complications I’d had, I guess.  I talked my wonderful plastic surgeon down to just cutting open my right boob to exchange the temporary saline-filled expander for a permanent silicone implant.  Okay, that was a little dramatic.  There’s actually just an incision under my boob.  I’m back to wearing the surgical bra and have a drainage tube in, but only one this time.  A little achy and sore, but not terrible pain.

But what he also planned to do was suction some fat from my abdominal area and insert it above the implant to further soften the look.  And do what’s called a mastopexy to the left breast to perk it up a bit.  Or a lot, as the case may be.  But I stayed firm (haha, cracking myself up, may just be the pain pills!) and nixed all that because I couldn’t face the thought of developing clots or unnecessary bleeding like before.  But he did explain that I could choose to do the mastopexy at a later date if needed and it would still be covered as reconstructive surgery.  I checked with insurance and that’s true.

So then he asked me to sit up (we were in the little curtained off room where you wait before outpatient surgery), me in my paper gown, so that he could draw the incision mark under my boob with that lovely indelible marker.  And with totally detached clinical appreciation he said to me and hubby, “These are probably the best match I’ve seen with a one-sided surgery!”

I completely chose to believe that he meant my unaided boob was unbelievably perky all on its own and rather closely matched the surgically enhanced one.  So I awkwardly said, “Thank you?” and we parted to meet up later in surgery.

Then a nurse started my IV, pushed me and my gurney to an operating room where they slid me onto a table exactly the width of my hips and had me breathe into an oxygen mask a few times.   And that’s all I really remember…