And I swear he is still being silly, as almost every time oldest was in my room at the house working on the bathroom floor his dad’s lamp on his nightstand would come on by itself!  It happened at least three times.  Never my lamp, only his dad’s…

Just last week the realtor told me the day of the open house she was hurrying through and turning lights on in all the rooms.  When she got to the master bedroom and walked in, one of the pulls on my dresser started moving up and down for about five seconds.  Said she thought she was imagining it at first but it kept going!  Then she jumped up and down in front of the dresser and tried to make it move again, but it wouldn’t.

I firmly believe there’s some extra energy in that room that’s making things happen.  And I never told the realtor about the light until she told me about the dresser pull.

I’m sure it’s hubby and I imagine he got a kick out of her jumping up and down in front of the dresser!

I’ve  never been sure how I felt about what happens when someone dies, but lately I’ve seen his light come on by itself many times.  Some items from his jewelry box seem to be missing, too, so I guess I’ll search for things in unexpected places!

Here’s the 4 season sunroom, pretty much as always, just less clutter and toys!  The floor is a relatively new vinyl wood flooring that clicks together and floats, held down by the baseboard.  Says it’s waterproof which will be great as kids/pets come in through the back patio doors.  We did the whole floor in one day!

It’s always been one of my favorite rooms and its decorated in beachy colors of blue, tans and some coral.  What you can’t see are the gorgeous seahorse family T. at Sonofabeach and his lovely wife made for me a couple years ago.  They are on the wall up above the entryway to the room.  Here’s a link to the previous post I did about those.  They are adorable. 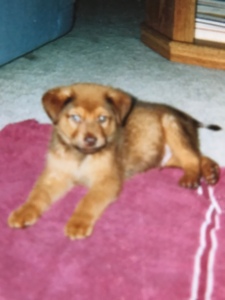 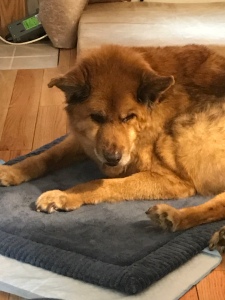 Today I lost another piece of my heart.  This morning I had to take Chief, my Chow/terrier mix, to the vet and make that decision.  Not unexpected, as he would have been 16 this summer.  These decisions are just so agonizing, as any pet owner knows.

We got him from a rescue group when he was just a small ball of fluff and were proud to be his people all these years.  He was brave and strong and loyal and also wild and crazy and silly.  And I will miss him so much.  One of those days when being a grown up just sucks…

I was walking the dog this morning and was shocked to see someone in the neighborhood still had a pumpkin on their porch at the end of March!  How tacky, right? 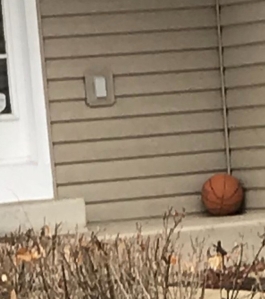 Then I got closer and realized I need to get my eyes checked, haha!  Happy Friday! 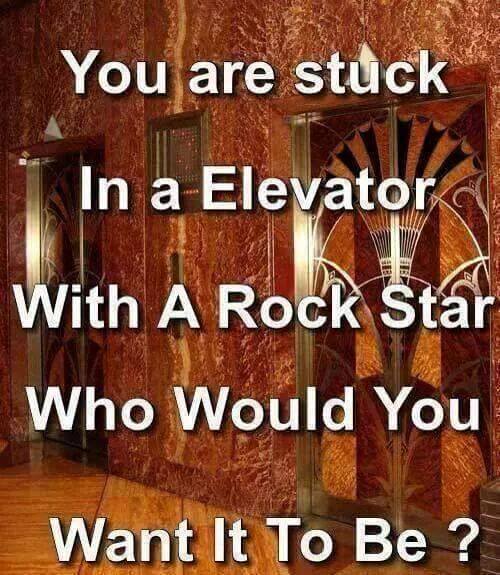 He’s not really a rock star, but Ed Sheeran is my new obsession.  He could sing Thinking out Loud to me over and over *sigh* and cry on my shoulder about his $20 million (yikes!) lawsuit…

Who would you choose?  (And am I the only one bothered because it should say “an elevator”?)