You creep in during the night…

When I wake in the morning,

You are there, tempting with your beauty…

Icy cold, you brush my face,

I push you away, you mean nothing today,

Touching my hair gently as you fall…

If you wouldn’t be with me at Christmas

Why did you come at all?

Are you ready to start the year off with two spectacular new adult releases from Embrace?  Enjoy an
intense romantic scifi thriller with Altered by debut author, Marnee Blake, or an emotional roller-
coaster ride contemporary romance in Last Wish by Erin Butler. 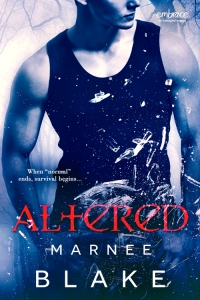 The sickness came on suddenly and violently. When it was done, waitress Blue Michaels was different in a really strange way. And the entire town of Glory was dead…except for her.

Only that’s not exactly true. A handful of people made it, including U.S. Army Specialist Seth Campbell, who was caught in the wrong town at the worst time. He’s fierce and protective, and way too good-looking. As much as they need a leader—as much as Blue wants to trust him—
there are too many questions and not enough time for answers. Now they are hunted. But what their pursuers don’t know is each of them has strange new powers. And they’ll use their “gifts” to survive…no matter who stands in their way.

Marnee Blake was a 2014 & 2015 Golden Heart® Finalist and holds a BA in English literature from Dickinson College. She used to teach high school students but these days she 0nly has to wrangle her own children. Originally from a small town in Western Pennsylvania, she now battles traffic in southern New Jersey where she lives with her hero husband and their happily-ever-after: two very energetic boys. When she isn’t writing, she can be found refereeing disputes between her children, cooking up something sweet, or hiding from encroaching dust bunnies with a book.

Nothing feels right. Not since my best friend died and I fucked up the 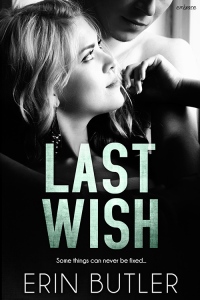 one promise he asked me to make. The past follows me everywhere, tangling me up like weeds, reminding me that my life is empty. So fucking empty.

Then she walks into the bar, all bright beauty and sweet lips made for kissing.

Em Stewart is a complication…one I need to avoid. She’s got heavy secrets of her own, ones she hides from her friends—and lies about to herself.

No matter how hard I try, I can’t resist her, and our unexpected road trip sure as hell isn’t helping my cause. But I’ll be damned if I screw up my first chance at something real…

Erin Butler is lucky enough to have two jobs she truly loves. As a librarian, she gets to work with books all day long, and as an author, Erin uses her active imagination to write the kinds of books she loves to read. Young Adult and New Adult books are her favorites, but she especially fangirls over a sigh-worthy romance.

She lives in Central New York with her very understanding husband, a stepson, and doggie BFF, Maxie. Preferring to spend her time indoors reading or writing, she’ll only willingly go outside for chocolate and sunshine—in that order.

RELEASE BLAST — Till Death Us Do Part by Cristina Slough… 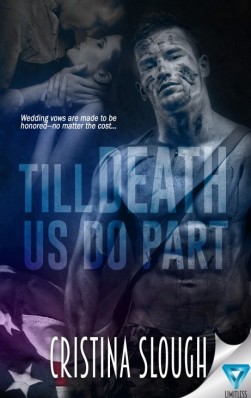 The fateful day Mimi Marcus has
dreaded begins with a phone call…
The wife of a U.S. Marine, Mimi
spent countless nights worried that her husband Joel would fall in the line of
duty. He had fought valiantly and served his country with honor. That’s exactly
what they tell her when they deliver the news—Joel was taken by the enemy in
Afghanistan. Her husband is dead.
In desperate need of closure, Mimi travels to the one place Joel still has ties—The Marcus Ranch in Texas,
inherited by his handsome younger brother Austin.
New beginnings are only an
illusion…
The closer Mimi grows to the Marcus family, the more she considers it home. But when suspicions of Joel’s past
surface, Austin refuses to disclose family secrets—even to his brother’s widow.
It’s only by accident she uncovers evidence of Joel’s tainted past. Devastated
by his lies and betrayal, she slowly opens up to Austin, and together they unfold
layers of pain and grief.
Mimi is sure she’ll never love again, but is Austin the man to prove her wrong?   Then
the unthinkable happens…
Just as Mimi finds new hope in a future with Austin, Joel returns home from war. Enraged, traumatized, and
teetering on the edge of insanity, Joel confesses to a history of deception,
revealing yet another secret—this one too terrible to forgive.
In an awful twist of fate, Joel proves marriage vows are made to be honored.No matter what.
BUY NOW
Amazon 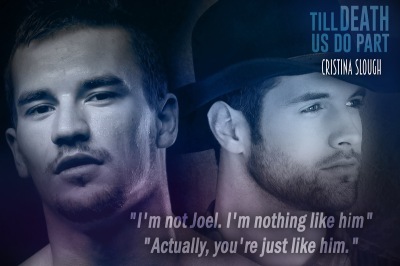 See my review of Till Death Us Do Part here.

Novelist, movie addict, and animal lover, Cristina Slough is the author of Till Death Us Do Part, her debut novel.

Cristina has always been a bookworm, rarely seen without a pen and paper in her hand, she loves delving into a literacy fictional world of her own.

At the age of 11, her junior school teacher told her mother that she would be wasting her life if she didn’t become an author. Throughout her teenage years and beyond, her parents spurred her on to keep writing. She later began a career in commercial real estate, working in London’s West End, a corporate bubble where she was unable to fuel her passion to write.

It was on her Californian honeymoon in 2012 that the bug to write was becoming increasingly difficult to ignore. After visiting Yosemite National Park she was inspired by the natural beauty of the land that surrounded her. Holding a special place in her heart, Yosemite would later be written into her debut novel.

She finally gave up the ‘big smoke’ when her son, Lucas, was born in October 2013.

When Lucas was a newborn, Cristina was told to sleep when the baby sleeps. She never could. There was a calling inside her to write. After getting to grips with her new role as a mother, she began working a psychological thriller, but she couldn’t fully connect to the characters she created. She ditched the manuscript and started Till Death Us Do Part (Limitless Publishing, 2015).

Cristina is married to Adam, who runs a successful business; together they share their Bedfordshire home with their son, crazy white German Shepherd and three spoiled cats. They can be found trekking through woodlands, or around the many shops Cristina loves to explore. As a family, they love to travel frequently, the United States being a firm favorite.

Till Death Us Do Part…

By ladieswholunchreviews on December 29, 2015 | 3 Comments

Till Death Us Do Part by Cristina Slough
My rating: 4.5 of 5 stars

This story felt a little slow-moving and difficult to get into at first, but the more I read, the more engrossed I got. And as the story progressed, I literally had a hard time putting it down until I finished. And, what a finish!

Brit Mimi met and married an intense U.S. Marine named Joel Marcus while he’s in England. After a short honeymoon, he’s sent back to Afghanistan.

When Mimi gets the call that every military wife dreads and finds out Joel was taken by the enemy and killed during a mission, her life spirals out of control. She receives brief condolences from her brother-in-law in Texas, and takes it as a sign that she should visit her husband’s childhood home and learn more about his past. She really only knows that Joel became a marine after 9/11 and left his family’s ranch in Texas, leaving his mom and younger brother running the ranch all those years ago. Now it’s only his brother, Austin, and his son who live on the ranch and Joel and Austin had been estranged for years. In fact, Mimi had never even met Joel’s brother because he didn’t come to their wedding.

Mimi’s best friend offers to travel to Texas with her and even though they find Austin less than welcoming initially, Mimi begins to feel at home in Texas and she adores Austin’s son, Jake. But most of her questions about Joel’s childhood go unanswered and Mimi begins to suspect that her fabulous hero of a husband wasn’t all he seemed. And over time she finds herself growing closer and closer to Austin and Jake. Austin seems reluctant to talk about his brother, only explaining that he was never even invited to Mimi and Joel’s wedding.

As time goes by and her friend returns to England, Mimi chooses to remains in Texas. She and Austin develop a relationship, neither really wanting to move too quickly because, after all, Austin is her husband’s brother and there is his young son, Jake, to be concerned about. But though Austin reminds her of Joel in looks, Mimi slowly realizes that Austin might just be a much better man.

Just when their relationship is beginning to blossom, word arrives that Joel, though severely injured, is alive and will be well enough soon to return to Texas. Austin is torn about what to do and Mimi is horrified that her feelings for her husband have changed so drastically. I can’t really say too much about the rest of the book without revealing too much, other than to say the ending and what leads up to it is startling and unexpected.

This is definitely not your lighthearted romance and if you’re looking for a happily ever after, this is not the book for you. But it is a fascinating look at relationships, deals realistically with some of the ramifications of war and is suspenseful, to boot. I think this author will be one to watch.

Hope you all had a very Merry Christmas and are getting ready to welcome 2016.   I’m kind of glad that things are getting back to what passes for normal at our house:

Sunday, I tripped over my son’s bulldog, Tank, who sneaks up on you like a ninja, and bumped into a cabinet, luckily protecting my injured knee but now sporting a lovely bump on my forehead…

J.P. has been busy rearranging my Nativity or what he refers to as “Jesus’ barn”.  Some days the figures are all lying down around the stable, sleeping, or perhaps the victims of some dread disease… and some days the people are crowded inside while the animals take care of Baby Jesus.  The set is an old one from Christmas Around the World, if anyone remembers that company that did home parties years ago.  They’re glass, but as long as he’s careful, I don’t mind.  He’s very precise with how he arranges them and it took me awhile to convince him that the Three Wise Men, Joseph and the shepherd were really men, even though they wore long robes and head coverings…

Back to physical therapy on Tuesday.   This is what that medieval torture machine looks like that they have me work out on:

We’re going out to dinner on New Year’s Eve and then to a friend’s house to play cards and await the New Year.  It’s a tradition we’ve observed for several years now and one we look forward to — and I think my kids are happy to celebrate on their own!