This week Christi over at Feeding on Folly and I decided we’d both post about our jury duty experiences and see how different/alike they were, cause she lives in Phoenix and I live in a suburb of Chicago.  I think we found that the general focus of possible jurors is lunch!  You can read her story here…

My story began a week before jury duty when I was on vacation and twisted my right knee.  I just had a x-ray and have some exercises and I’m icing it and have possible PT down the road, but it’s getting better.  That’s me and hubby in Southern California right before Halloween.  Now I know you’re thinking, WOW, cool over-the-knee black boots.  But, no, that’s my sexy black over-the-knee brace! 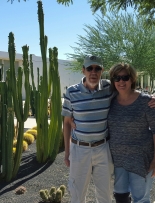 So the Monday after we got back, jury duty started. I had to check after 4:30 the day before and found I didn’t need to report in the a.m. Then I had to check again at noon to see if I had to report at 1:30.  EVERY DAY, people, in Will County, you do this every day for a week unless you actually get picked for a trial.

When I didn’t have to report Monday afternoon, I was able to get in to see the doctor.  She thought it might be a sprain and wanted me to stay off my feet as much as possible for a week. She said jury duty should be okay as I’d mostly be sitting.  Sure.

After checking online at 4:30 Monday afternoon, I found I had to report at 9:30 a.m. on Tuesday.  It’s about a 30 minute drive to the courthouse and I would have taken pictures, but I needed my phone for Google Maps so I wouldn’t get lost.  But here’s what the Ruby Street bridge on Historic Route 66 looked like when I was supposed to be going across it.  Yikes, scary!  Hate those old bridges.

So the trip took a little longer and when I finally got to the parking garage a big sign said to leave camera phones, tablets, etc. in your car.  On the sixth floor of the parking garage, where jurors park. Where the elevator was not working and you have to walk down and then later walk up six flights of stairs.  Craptastic.  And, just a thought, but does it seem like a good idea that all the cars on the sixth floor of the parking garage have smart phones and/or tablets in the glove compartments and everyone who parks in that garage knows that?

So I hobbled down the stairs and across the street and into the courthouse.   Lucky for me the jury room was on the first floor.

By 9:30 there were about 80 of us in the room.  One of the bailiffs, a very quiet, older man, checked us in, pointed out where we were to get badges and then instructed us to watch a 20 minute video on the county court system and what we might expect.  He said there were three cases scheduled and unless they settled, 12 jurors would be needed for each.  We watched, we waited for him to return, and when he didn’t, we focused on something really important — what was within walking distance where we could get lunch?

A very nice woman named Vicky was sitting next to me and next to her was a guy she knew named Mike.  I felt better, my lunch group was set up.  There even was a binder with menus from Subway, Chicken-N- Spice, Jitters Coffeehouse.  Very organized.

Our bailiff came back a while later and changed the television screens to The Price is Right and an infomercial channel.  Yay!  Vicky was trying to watch The Price is Right but people kept getting up to use the bathroom, go out for a smoke and just generally getting in her way as she tried to explain to Mike and me how the games worked.  Talk about frustrating 😉

And then shortly after Drew Carey said goodbye, our bailiff came back in and said all three cases had settled and we were free to go.  It was 11:10 a.m. and we hadn’t even gotten to go to lunch.  I, for one, was very disappointed, but most people were out of there like the place was on fire.  Vicky was a dear and s-l-o-w-l-y walked up the six flights of stairs to our cars with me as we motioned the other 72 people to go around us.

When I got home, I had to go back to the checking after 4:30 p.m. and noon schedule everyday, but sadly, that was the extent of my jury duty.  I haven’t gotten my $25 check yet, either, but this is Illinois and we are having a budget crisis. Really, it’s not bad for two and a half hours and way more than I get for writing this blog.   If they ever need me again to do my civic duty, I am so there…

Thanks for the visit, now go see my friend, Christi, over at Feeding on Folly.  She has some fab recipes to check out, too, something you will rarely see on my blog!